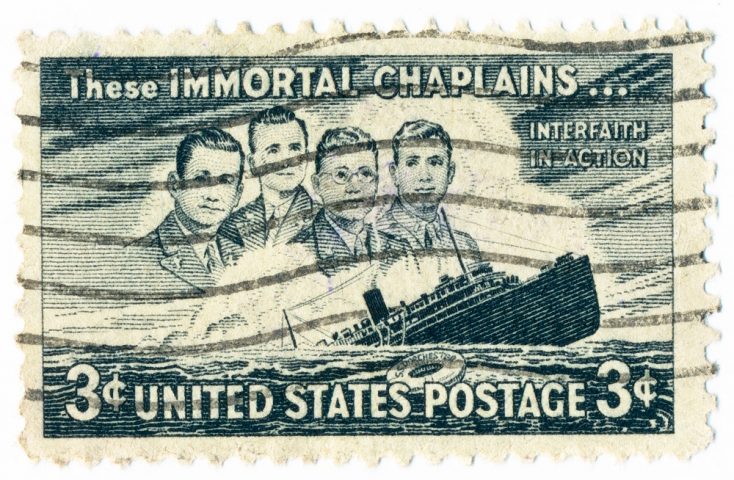 In 1948, the United States Postal Service issued this stamp to honor the four chaplains.

In the early hours of Feb. 3, 1943, the USAT Dorchester, one of three ships in the SG-19 convoy, was nearing its destination at an American military base in Greenland when a German torpedo slammed into its hull with deadly precision. Less than 20 minutes later, the former luxury coastal liner, which had been converted into an Army transport ship to support the war effort, disappeared under the water.

During that brief period of time after the initial explosion and before the ship sank, chaos ensued as those still alive after the torpedo blast fought to abandon ship. Of the 902 service men, seamen and civilian workers aboard, 672 went into the water and never came back.

Among those who died were four Army chaplains of different faiths, who worked together to distribute life preservers to those aboard the sinking vessel before eventually giving up their own life jackets to save more soldiers. After helping members of the crew leave the sinking vessel, the chaplains – Lt. George L. Fox, a Methodist minister; Lt. Alexander D. Goode, a Jewish Rabbi; Lt. Clark V. Poling, a Dutch Reformed minister; and Lt. John P. Washington, a Roman Catholic priest – remained aboard, praying and singing hymns together as it went down. This year marks the 75th anniversary of their sacrifice.

“Despite coming from very different backgrounds, Reverend Fox, Reverend Poling, Rabbi Goode and Father Washington worked together to save the lives of many service men without giving a second thought to their own,” said David Burden, project manager, VSC. “Even after 75 years their story remains an example of true valor and selflessness in the face of despair.”

In 1944, the four chaplains were posthumously awarded a Distinguished Service Cross and a Purple Heart. Members of Congress also wished to grant each a Medal of Honor but were constrained by the requirement of heroism under fire. Instead, Congress authorized a Special Medal for Heroism – called The Four Chaplains’ Medal – which was presented to their next of kin on Jan. 18, 1961.