Bringing Veterans ‘Out of the Darkness’ 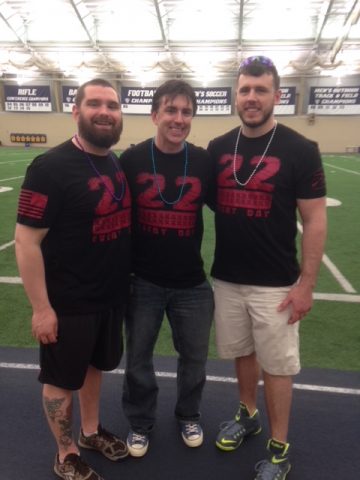 Scott Palasik (center) is flanked by two student veterans during the 2018 Out of the Darkness campus walk event at The University of Akron.

Campus Walk Program at The University of Akron Raises $33,000 in Support of Suicide Prevention

The University of Akron’s (UA) annual “Out of the Darkness” Campus Walk has quickly grown into one of the country’s largest, raking in more than $150,000 in support of the American Foundation for Suicide Prevention (AFSP) over a five-year run. The most recent event in April drew nearly 400 participants and raised more than $33,000 toward suicide prevention – well above the $20,000 goal.

Surpassing the goal amount is hardly new. So far it has happened every time, a trend that event founder Scott Palasik, an associate professor at UA’s School of Speech-Language Pathology and Audiology, hopes to see continue.

“What we’re seeing is that there is a large need for people in the area who just want to experience a day with others who’ve dealt with loss or are struggling themselves,” Palasik said. “Putting on this event is very special for me, personally, and my focus has always been to try to get veterans involved in some way.”

The “Out of the Darkness” Campus Walk program is the AFSP’s signature student fundraising series, created to engage young people in the fight against suicide, which is the second leading cause of death among 18- to 24-year-olds. Though Campus Walk events are not geared strictly toward members of the military community, helping veterans in crisis has been one of Palasik’s primary goals since launching the UA program. His reasons are deeply personal.

Palasik’s father, a former U.S. Army ranger and a Korean War veteran, turned to alcohol and became abusive after returning to civilian life. Though he never served a day in the military, he has seen first-hand the toll that it can take on a person.

“I watched my dad struggle, and I know a lot of that came from his time in the Army,” he said. “He saw and experienced things that led him down a bad path, and he never got any help.”

Palasik is no stranger to suicide either, having lost his cousin and a close friend to the increasingly common public health problem.

In prior years, Palasik partnered with a local American Legion post to plan and promote the “Out of the Darkness” event. This year, he worked primarily with UA student veterans, of which he said there are more than 1,000. He plans to work with them again in preparation for next year’s event and in the future.

“Members of our military are putting themselves in harm’s way all the time, and they are doing it for all of us – people they don’t even know personally, and yet they are out there and doing it,” Palasik said. “They are the ones who are coming back home and having an extremely difficult time making a normal life for themselves. I think they’ve earned a life of peace, and the fact that so many of them struggle so much that it comes down to suicide is not right.”

If you are interested in supporting or participating in the next UA “Out of the Darkness” Campus Walk, contact Scott Palasik at 330-972-8185 for more details.