Challenge of a Century 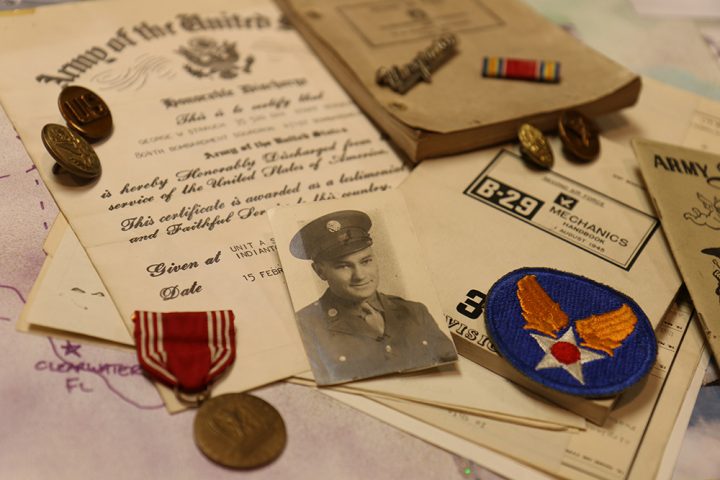 When George Strauch was born in 1918, World War I was still underway and German forces had just begun what would become the deepest military advance by either side since the conflict began. In 25 years, he would find himself participating in a new war effort against those same forces. 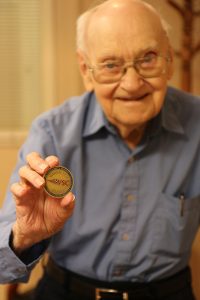 George Strauch shows off the military challenge coin gifted to him by the VSC.

Strauch, who celebrated his 100th birthday on March 28, 2018, served his country during World War II as an airplane mechanic for the U.S. Army Air Corps, the precursor to the modern day U.S. Air Force. To celebrate this milestone, David Burden, project manager, VSC, visited Strauch during his birthday celebration to present him Challenge of a Century VSC Honors World War II Veteran George Strauch with Challenge Coin Presentation on his 100th Birthday with a military challenge coin.

“Military challenge coins are traditionally handed out to service members who successfully carry out a challenge given to them,” Burden said. “In recognition of George’s 100th birthday, we are honored to present him with one. By all accounts, he has earned it.”

Though challenge coins were not commonplace during World War II, the visit from the VSC was nonetheless a surprise and an honor for Strauch.

“I didn’t know a thing about it,” said Strauch, regarding the coin presentation. “It was rewarding to receive the coin, and it was also rewarding to be able to serve my country while getting to work on airplanes.”

Born in 1918 in Helen, Pa., Strauch was the youngest of Joseph and Anna Strauch’s nine children. When he was 5 years old, his family moved to Keisterville, Pa., the town where he met his future wife and where his interest in aviation began.

“I was always fascinated with airplanes and watching them fly,” he said. “I remember back in the old days my friends and I would see an airplane coming overhead behind our grade school – just a little Cessna type plane – and we’d run up that hill behind the school to watch them. We thought we were going to see them land or something.”

After graduation from high school in 1937, Strauch went to work at the Lincoln Mine Company Store in Keisterville before being drafted into the U.S. Army. Entry tests showed Strauch had a high mechanical aptitude, and he was assigned to the U.S. Army Air Corps. He spent much of his military service at Pueblo Army Air Field in Pueblo, Colo., where he helped build and repair B-24 and B-29 bombers.

One of Strauch’s primary duties involved running safety wire through bolts fitted with castellated nuts and using a special tool to twist the wire. The process was more complex than it sounds, he said.

“There was a very specific way you had to turn this wire so that the wire wouldn’t come off,” Strauch said. “You had to tighten the one bolt, and it had to be set up so that if one loosened the other would tighten.”

Strauch served over three years of his military service before the war ended. In February 1946, he was honorably discharged as a staff sergeant. When asked what he did after leaving the Army, Strauch quipped, “I went to bed.”

That summer, Strauch married his long-time sweetheart Sarah Virgina Waggett and began a 38-year career with Babcock & Wilcox in Barberton, Ohio. He and his wife had three daughters together – Rebecca, Kathy and Dotty.

Wanting to make her father proud, Rebecca Strauch also joined the military. Her initial enlistment turned into a 21-year career that ultimately ended with her becoming an aviator, carrying her father’s love of airplanes to the next generation. She eventually became a pilot for United Airlines.

“I’d do it all over again,” Rebecca Strauch said. “It was a great experience. And when you’re flying helicopters, you get to have some fun.”

Regarding his own military experience, George Strauch echoed the sentiment.

“I really enjoyed the mechanics part of working on planes, at least in my capacity,” he said. “I definitely took a liking to it.”