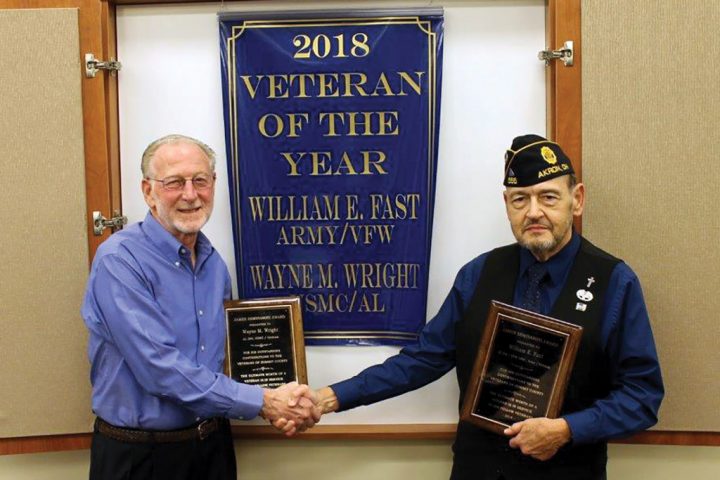 Each year, the VSC presents its Veteran of the Year award to a Summit County veteran who demonstrates selflessness in the form of community service, and each year the organization finds itself choosing from hundreds of high-quality candidates who go above-and-beyond in their quest to improve the lives of others. This year was no different, except that two co-winners were selected: local Vietnam veterans William Fast and Wayne Wright.

“There are so many veterans across Summit County doing great things to help their community and fellow veterans that sometimes it really is impossible to choose just one for this prestigious award,” said David Burden, project manager, VSC. “This year, the VSC is pleased to name William Fast and Wayne Wright as co-Veteran of the Year award recipients. Both of them have dedicated countless hours to improving the lives of Summit County veterans and their families.”

Both Fast and Right grew up in Northeast Ohio and came from families with a history of military service. Both had fathers who fought for their country during World War II. And both served as active-duty soldiers during the Vietnam War – Fast with the U.S. Army and Wright with the U.S. Marine Corps. However, each of them had their own reasons for joining.

For Wright, who enlisted in July 1966 and was honorably discharged in March 1970, the choice was about discipline.

“I recognized I had some problems with discipline coming out of high school, and I figured that if I went into the Marine Corps I’d get some discipline,” he said. “It made a big difference in my life going forward.” 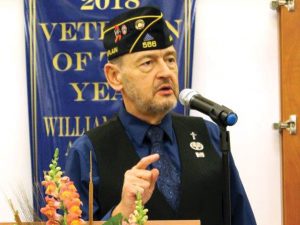 Fast, who served from the fall of 1967 through February 1975 – including two tours in Vietnam – joined the Army as a medic with the intent of continuing after the war ended.

“I really wanted to make a career out of it, but my wife didn’t enjoy all the moving,” he joked.

Fast’s military experience was the launching pad for a 40-year career in nursing, most of which was spent in hospice care. His first-ever nursing assignment came in 1972 at Walter Reed Army Medical Center in  Bethesda, Md., where he served in the Presidential suite.

Both Fast and Wright similarly felt compelled to help veterans in their community after leaving the service. Fast has been actively involved in American Legion post 566, Veterans of Foreign Wars (VFW) post 1066 and the Military Order of the Purple Heart. In addition, he became an ordained minister in 2010 and joined the Ohio Western Reserve National Cemetery as chaplain of the advisory board. Much of his time has been spent counseling veterans to help them cope with hospice.

“I’ve been through a lot of things other veterans have been through, and I’ve worked with a lot of illnesses they go through,” he said. “I think I can understand what they’re dealing with, and I think that helps.”

Wright, likewise, is a member of numerous local veteran group, serving as a post commander with American Legion post 209 and post chaplain for VFW post 8975, which he’s been involved with for 50 years. He also is active in the Marine Corps League and Disabled American Veterans. Whether fighting against veteran homelessness or to prevent veteran suicide, his goal has always been to help his “brothers in arms.”

“That’s the way I’ve always looked at it – these are my fellow veterans,” he said. “You don’t have to be in a war. Veterans, we’ve all done something, and it doesn’t mean we had to go to Vietnam, the European theater or the South Pacific to experience, in some respects, the same thing. We’ve all experienced a certain level of discipline, a certain level of training and being ready to do what you have to do to defend our country and others in this world who want to live in a free and democratic society.”