The Power of Volunteerism

Pedaling Toward a Better Future 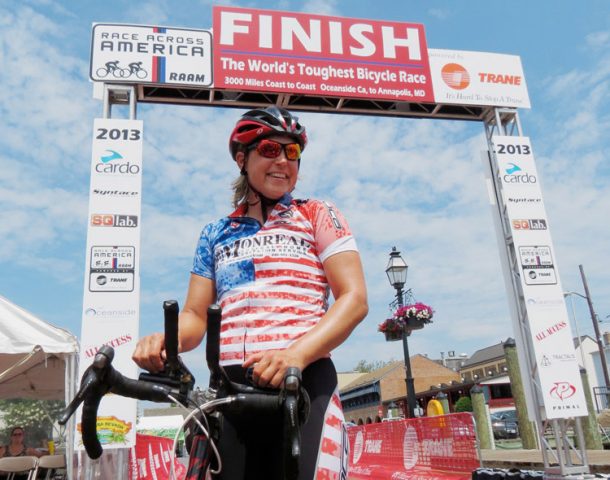 Wheels4Change co-founder Cassie Schumacher stands near the finish line following her successful completion of the 2013 Race Across America endurance event.

That’s how many minutes participants were asked to spend riding their stationary bikes – one for every Ohio life lost in combat in the Middle East since 9/11 – when Wheels4Change held its first-ever fundraising event, “Pedal for Heroes,” in February 2012. The level of dedication among those who attended the inaugural event wasn’t lost on Wheels4Change co-founder Cassie Schumacher.

“It was really powerful,” she said. “People refused to get off of their bikes because they recognized that each minute was a life lost.”

Since then, many things have changed for the Fairlawn, Ohio-based charity. Over the years, the organization has added a bike giveaway and rental program and expanded its outreach efforts. In 2016, Pedal for Heroes morphed into the Remembrance Fitness Event and began to accommodate swimming, running and other forms of physical activity. This year it will change again, replaced by a summer-long virtual fitness challenge and an accompanying outdoor biking event aimed at honoring fallen soldiers, Schumacher said.

As 2018 progresses, the group’s leadership structure also is evolving. Schumacher has begun to turn over major responsibilities to several other members of her team – military veterans, whom she hopes will imprint their own vision on the organization going forward. What won’t change is Wheels4Change’s commitment to honoring and supporting Northeast Ohio veterans and their families through outreach, education and awareness.

“The veteran community is a very underserved population, and besides being underserved, it’s a population that can be pretty hard to reach,” said Schumacher, an avid endurance cyclist who “accidentally” laid the foundation for Wheels4Change while planning for her participation in the 2012 Race Across America. Schumacher, whose father is a Vietnam veteran, decided to use the 3,000-mile ultra-endurance event as a platform to raise awareness for the struggles that veterans endure. The positive response she received, along with the $35,000 she raised to support veterans returning home from active service, prompted her to take it even further.

With the help of her friend Leslie Manna, Schumacher launched Wheels4Change as a registered 501(c)(3) charity in spring 2012. Since then, the group has focused on providing fitness opportunities to help veterans better connect with their community and to improve their physical and psychological health.

“When you’re in the military, you have a community that you’re a part of, but when you leave and you’re struggling, the loss of that community can have a huge impact,” Schumacher said. “Physical fitness is a great way to build a new community, and there is a lot of research to support it as one of the best antidepressants out there.”

Wheels4Change supports and raises awareness for veterans in several ways, including its “Ride for the 23” bike event, created to educate members of the community about the 22 veterans and one active-duty service member who take their own lives each day. In addition, the Wheels4Change Athletic Team – made up of military veterans, spouses and supporters – participates in various racing events, marathons and triathlons to bring attention to veteran issues and raise funds to support its various programs. This year, more events will be added, Schumacher said. Through partnerships with local veteran groups and various other entities, Wheels4Change also trains qualified veterans to become certified peer mentors.

At the core of Wheels4Change is a bike program that offers veterans and their families the chance to borrow bicycles from the group’s purpose-built storage shed at Ohio Veterans’ Memorial Park in Clinton, Ohio. Veterans also can earn a free bike by completing 5-25 hours of “give back” service, either through volunteer work with Wheels4Change or another local organization.

“Ultimately, we want to help people help themselves,” Schumacher said. “For veterans interested in earning a bike, we count one hour of community ‘give back’ volunteering with us or a like-organization as $10.”

The benefit to this strategy is twofold, she said. Not only does it give veterans the opportunity to become more involved with their communities through volunteer service, but it also serves to perpetuate the program as these volunteers encourage friends and family to participate.