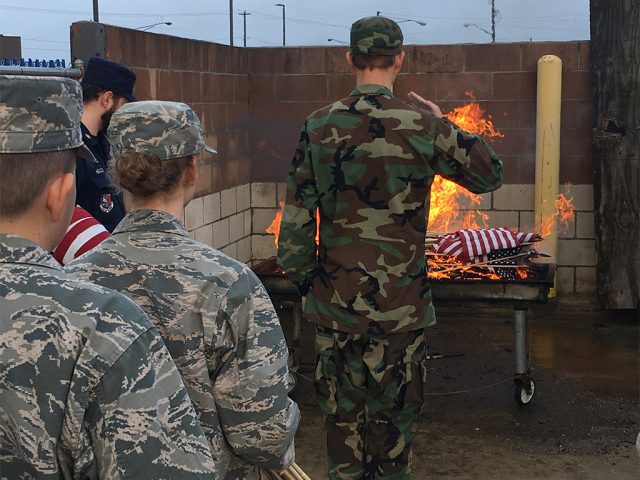 The event, which took place Oct. 6 at the VSC’s Akron headquarters, gave participants a chance to perform a valuable community service and facilitated a better understanding of how to show respect to an American flag that is no longer serviceable. That lesson begins with learning how to correctly describe a flag retirement ceremony, according to Michael Sidman, Assistant Cadet Activities Officer for the Ohio Wing CAP.

“Especially with Cadets, you worry that they might go to school and say, ‘I got to burn some flags this weekend,’ and that’s not the right answer,” said Sidman, who organized and helped oversee the flag retirement ceremony. “This event gave us a chance to educate them that they were retiring flags through burning, which in accordance with the code that governs the retirement of the American flag.”

According to Sidman, performing a proper flag retirement ceremony comes with “loose general guidance” as opposed to specific details. Much like other ceremonies, there are multiple versions of the right way to approach it. Each version ends with a display of respect, either by retiring the flag through burning or burial.

Sidman praised the retirement ceremony as a valuable learning experience for participating Cadets and adult volunteers alike. More than that, it helped teach the next generation of Americans about what it means to be a good citizen.

“I think an important hallmark of being a good citizen is knowing that when a flag is no longer serviceable you don’t just throw it out in the trash,” Sidman said. “You have to treat it with a level of respect to make sure that we honor those who’ve served, those who’ve paid the ultimate price for the freedoms we enjoy and all Americans who are trying to move our nation forward.”

Since its formation during World War II, members of the CAP have served their communities through emergency response, aviation and ground services. Designed for young people ages 12 to 18, the CAP Cadet program helps to shape members into future leaders and better citizens and prepare them for careers in aviation, space or the military. To learn more about the Ohio Wing Civil Air Patrol, visit ohwg.cap.gov.